EDI has been around for decades, and experts have been predicting its downfall for nearly as long. Many criticisms of traditional EDI are valid.  EDI software can be expensive and difficult to implement.  It can require specialists with a depth of experience in niche technology that is far removed from your company’s core competency. At the heart of the matter is that it’s really hard to get transactional data from… Read More »

Hats off to NEECOM…thanks for 25 years!

Years ago there were dozens of EDI and e-commerce user groups scattered around the country.  This ComputerWorld article from 1993 shows how vibrant the EDI user group community was back then – citing 32 local and regional user groups.  A list of groups purportedly from “EDI World” magazine in 2001 claims about 60 groups were active.  Today I’m aware of only a couple active groups – the Atlanta EC Forum… Read More »

There is likely no better way to understand the benefits of e-business than learning about how other companies improve efficiency through the use of technology.  McNeilus Steel is one of Foundational’s longest tenured customers, and is a great example of the potential for improvement through EDI and e-business. McNeilus Steel is a family-owned full line steel distributor and processor dedicated to providing the best in material quality, responsive customer service,… Read More »

Foundational Year in Review…and a look ahead

I thought I’d take a few minutes to write about some of the great new things we’re working on at Foundational for 2016, but as I collected my thoughts, I decided to first review how we got to where we are at the beginning of this New Year. 2015 was a transitional year for us.  We started out as Paragon B2B, and ended as Foundational e-Business.  The reason for this… Read More »

One of the things I enjoy most is visiting e-business users and community in person, learning what is most important to them, and what is trending in the industry.  October was a busy month for us at Foundational, with two conferences, a user group meeting and numerous customer visits, so we had plenty of opportunity to see what is going on outside our office walls.  This is always a treat,… Read More »

Don’t get caught up in the three letters (E, D, and I)

This month one of my customers is in the early stages of a migration from JD Edwards to Dynamics.  In planning they were sure to clarify that they needed to be able to import and export certain types of transactions in order to facilitate their streamlined interface with our service.  No problem.  Later, as the project was kicking off, someone mentioned that they use EDI and the software consultant panicked.  … Read More »

Maybe the VANs got it right?

When I started working with EDI nearly 20 years ago I saw the opportunity (and need) to radically change the way businesses communicate.  My plan was to revolutionize B2B communication by overhauling the stodgy old EDI methods and technology.  In some ways I, and others with similar ideas, were successful.  E-commerce is now approachable for many small businesses with less costly translators and competitive services.  However, if you had told… Read More »

The Three Stages of EDI Implementation Part 3 – Extensive Use EDI

This blog post is the last of a 3 part series describing the various types of EDI implementations (Initial, Limited Use, and Extensive). The prior posts can be found here: Intro, Part 1 and Part 2. Stage 3: The Extensive Use EDI Implementation Once the limited EDI use organization becomes very effective at implementing new trading partners their perspective may begin to change, and many will transition to an organization… Read More »

The Three Stages of EDI Implementation Part 2 – Limited Use EDI

This blog post is part 2 of a 3 part series describing the various types of EDI implementations (Initial, Limited Use, and Extensive).  The prior posts can be found here:  Intro, and Part 1. Stage 2: The Limited Use EDI Implementation It doesn’t take long to see the benefits of EDI when it works well.  Whether you measure the gains in terms of your ability to sell to customers with… Read More »

This blog post is part 1 of a 3 part series describing the various types of EDI implementations (Initial, Limited Use, and Extensive).  Please read yesterday’s post for a more detailed introduction.   Stage 1: The Initial Stage EDI User EDI is a technology that is often times implemented simply to comply with the requirements of one’s trading partners.  Try telling Walmart or Target that you plan to send them… Read More » 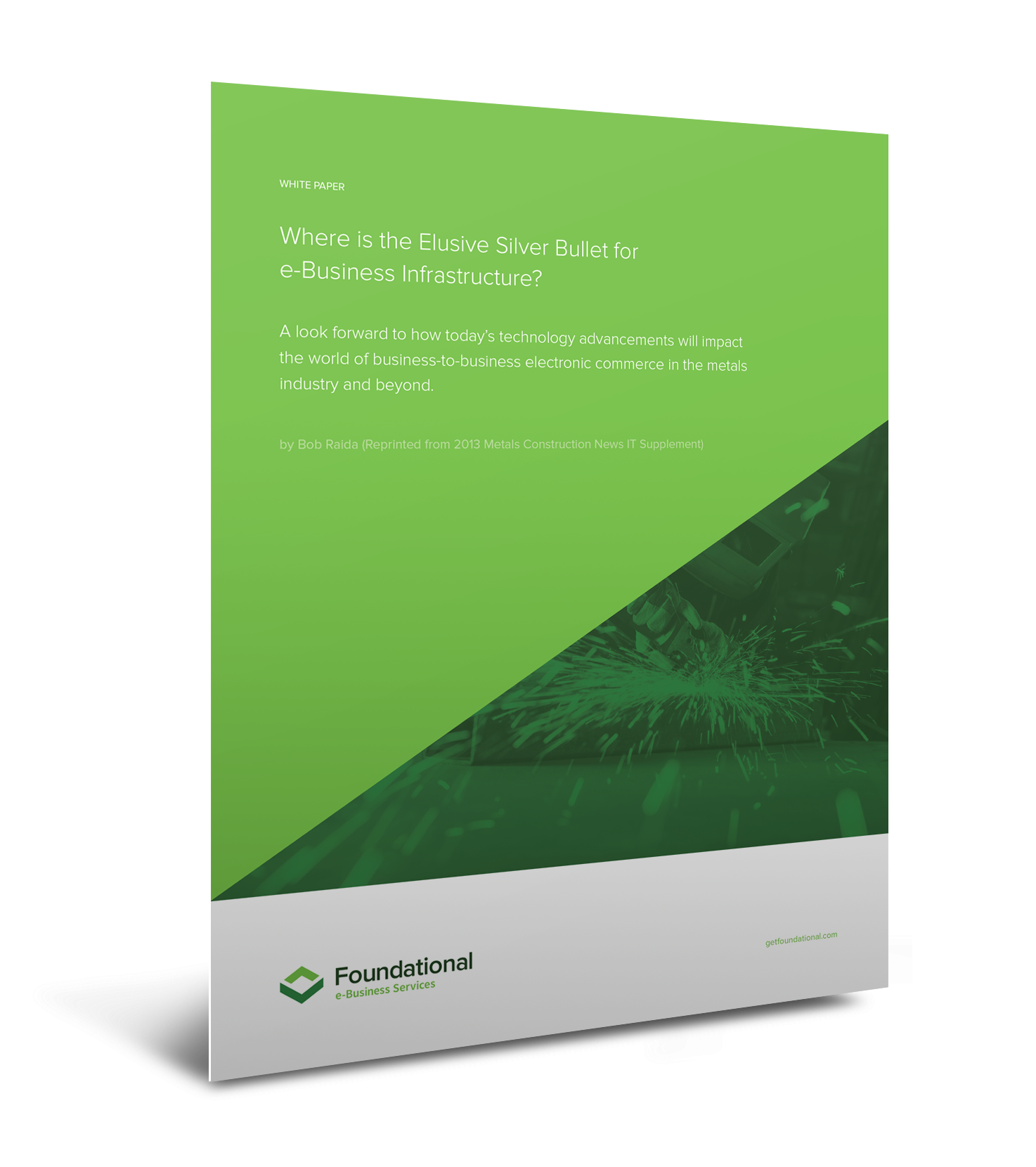 Where is the Elusive Silver Bullet for e-Business Infrastructure?